Keeping your own trade rule is one of the endless challenges for all traders.

And this video is for those who tend to break his own rule and get loss over time.

Like the other day, when the market spikes up and down, like the Gold or USDJPY on 13th of August, you know, they spiked more than 100 pips. and I was watching Facebook and twitter afterwards, and I saw one of the traders lost like 10 million dollars by that, but if you set your own rule and keep the rule, then the loss should’ve been kept minimum in such a volatile situation.

So how can you keep your own rule as a successful trader? That’s something I will be talking about today, so let’s get started!

What is a “trade rule” really for? 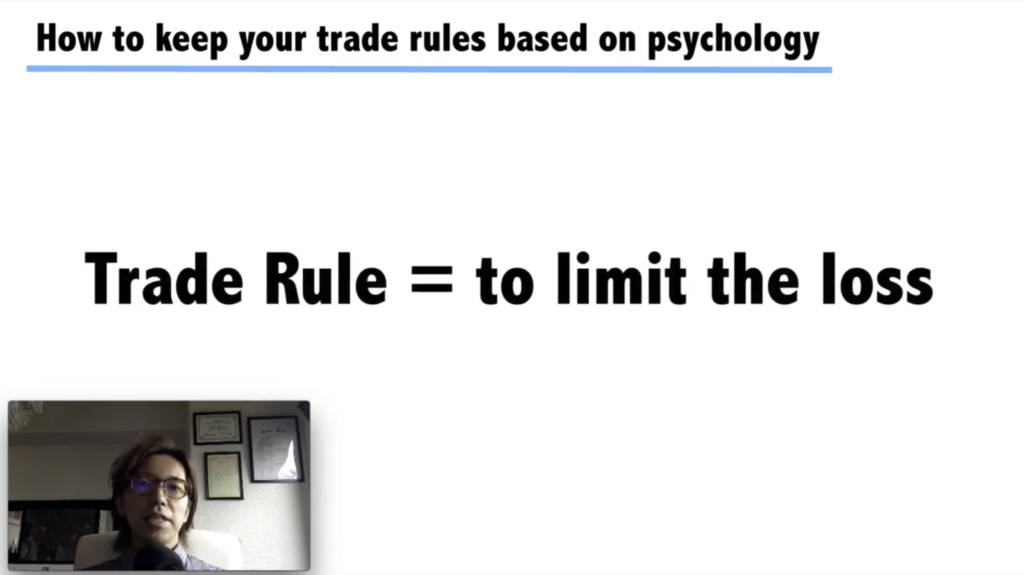 First, let me tell you a truth about trade rules. Basically the rules are not for getting profit, but basically it’s for limiting the loss.  So keeping your own rule, to be able to keep your own rule is a must have skill and it’s a minimum requirement to become a successful trader.

So what should you do when you broke the rule? The answer is, you promise yourself what to do next. You know, you think breaking rules is not a good thing but you just broke it.. when it happens, think yourself “how you can quite such bad habits in the future?” and set another rule to prevent from it.

Let me give you an example in forex trading. 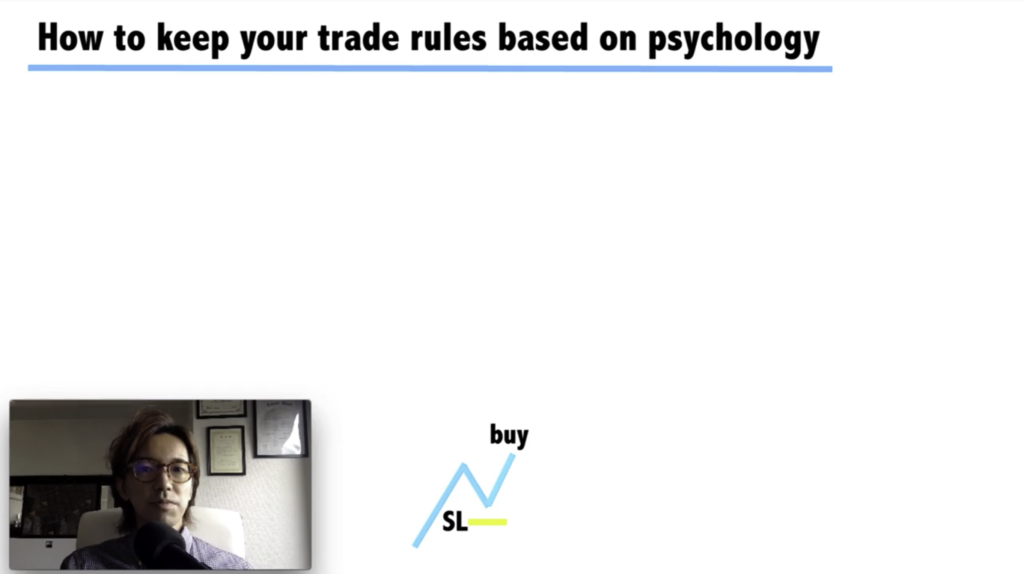 And you hold that position for 5 mins, 10 mins.. and after like 30 mins.. the price starts to go backwards. And when you look at the reality, in your mind, two thoughts are fighting, one is “ok, I will cut loss here based on my trade rule” but the other mind is telling you “I will move the Stop loss a little below so that it won’t get loss cut yet. And after that, the price might go up” Then, the price reaches the stop loss and it’s about to touch it. Then, you decide to move it downwards, or you just cancel the stop loss.

What can you do afterwards? You are making some loss already and you cancelled the stop loss.

Do you pray while trading? 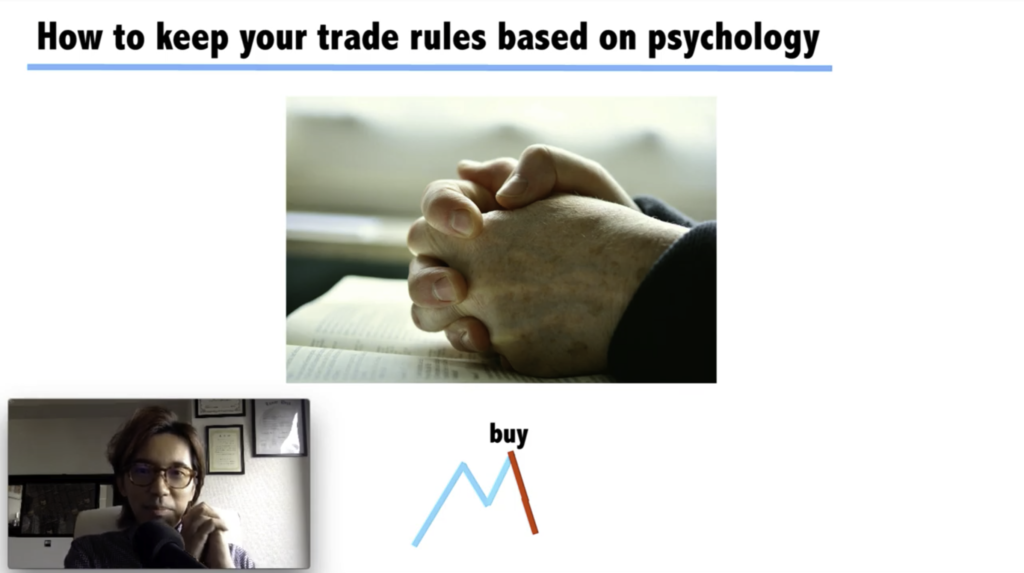 After that, all you can do is just pray. Pray that the price will go up and hopefully, you get profit eventually.

Or another case might be, as soon as the price touches the stop loss, and after you get loss, you just go ahead and place another buy or sell to win back the loss.. now, that’s what I call gambling. And in fact, that’s what I have been doing when I first started forex trading. But if you keep doing this, your capital will be decreased overtime for sure.

Execute the trade rule no matter what 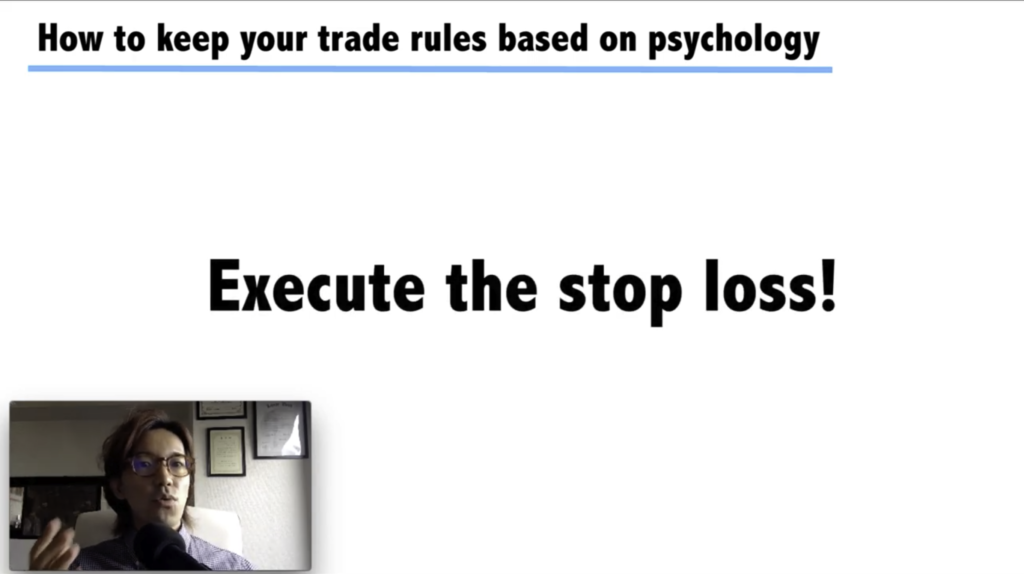 That was just an example, but what I wanted to tell you is first of all, if you place the stop loss or when the price comes to a point where you decided to cut loss, you have to execute it no matter what. 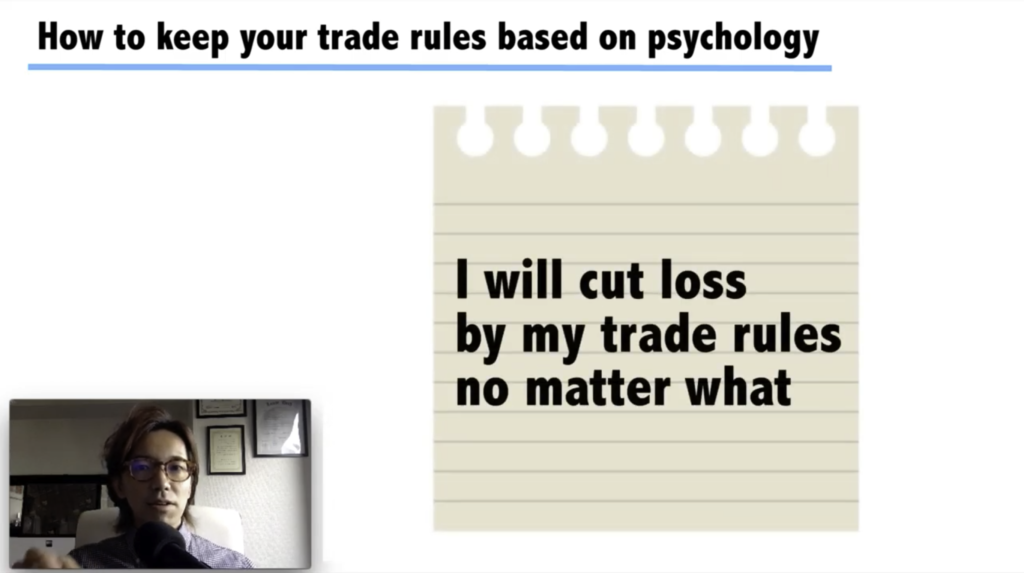 And to be able to have that discipline, my suggestion is, and this is actually what I did, but for example, you find a piece of paper and write “I will cut loss by my own trade rule no matter what” you write it down on a piece of paper and place in front of the monitor, and read it every time before you open a chart. It worked very well for me so you can try this.

You know, the reason why traders don’t want to cut loss is basically because they have a mindset that the position should be closed with a profit, and losing money is painful basically.

However, don’t think one single trade owns your whole performance. Your performance should be checked and calculated over time. If you are using MT4 or MT5, you can get your overall performance from the system, or you can manually record your performance in excel format or on a paper and do it for a month, so that you don’t be happy or be sad by just 1 single trade. 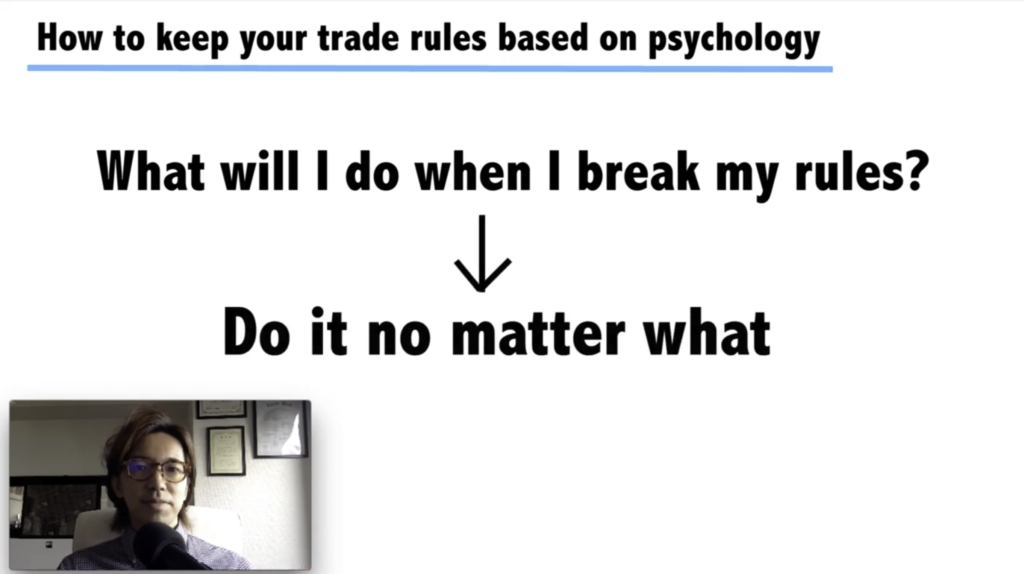 So the point is, you need to keep thinking “what will I do when I break the trade rules?” And once you decide what to do, you do it no matter what. Let me give you another example. 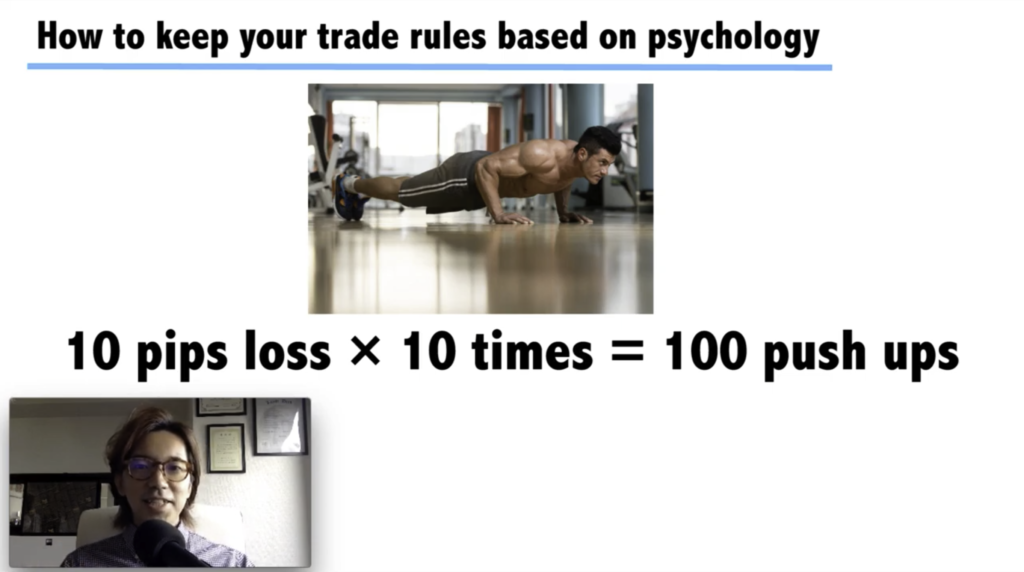 Keep your trade rules based on Prospect Theory 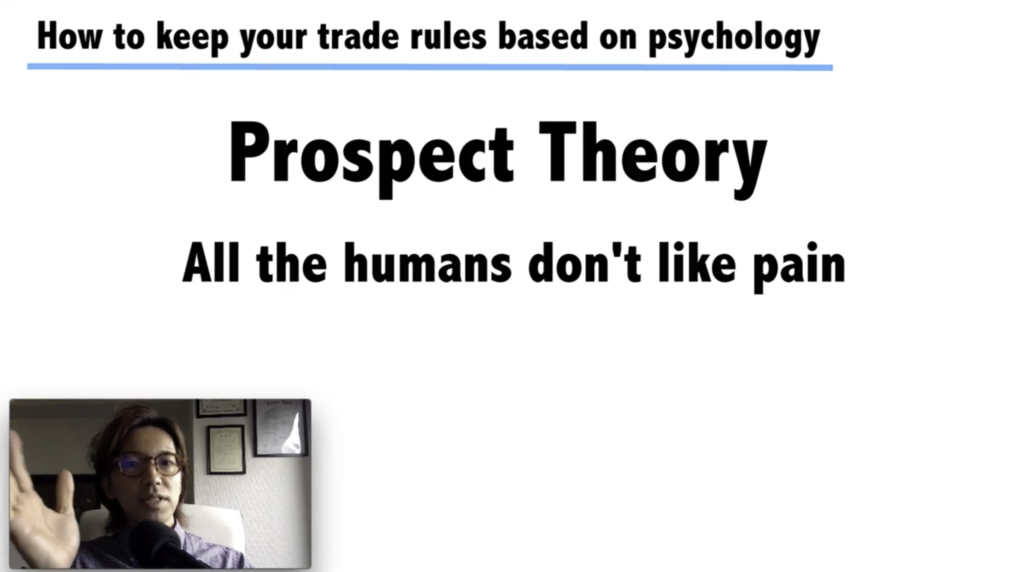 And this is effective because in Psychology there is a theory called “Prospect Theory” and it basically tells you all the humans don’t like to have pain. Psychologically, everyone tends to avoid the pain. So by setting another rule that you think it’s painful to you, every time when you break the trade rules, you will be able to obtain a mentality to be able to keep the trade rules over time. Of course, each people have different aspect, and I don’t want you to go extreme and eventually quit forex trading because of the pain, but it depends of your preference. So anyways, try setting another rule in case you break your own forex trade rules, and see if you can keep them. 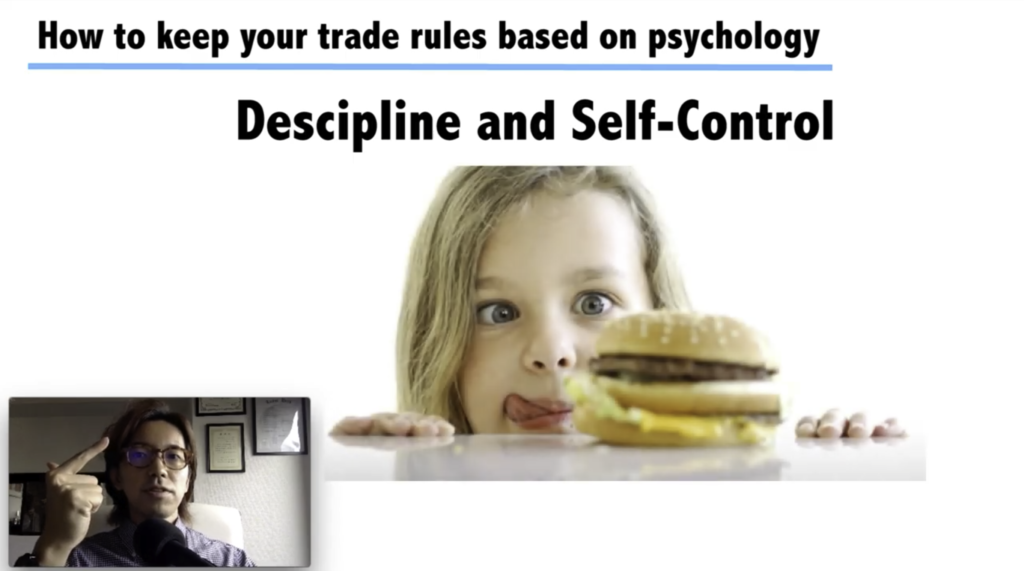 The most important thing for a successful forex trader is discipline and self-control. If breaking rules becomes your habit, no matter how much capital you have, one single trade will blow up your account. For example, even if you have 10 million dollars, if you trade in a way that it becomes 0, even if the risk might be just 1%, it’s not a trade, it’s called gambling. Rules are Rules, you know, and whether the rule is big or small, you need to keep it no matter what, because if you cannot keep a small rule, you cannot keep a big rule anyways. And even if you get big profits in few trades by breaking the trade rules, you will get loss in a long run for sure.

I may sound a little serious today, but I’m telling all this because it’s really for you, because I used to break my own trade rules many times at first and get loss over time, and I don’t know how many times I thought I should quit forex trading. But for those who are watching my video, I don’t want you to lose your precious money, so that’s why I have been creating videos like this.

So for those who are subscribing to this video, and of course, for those who are not subscribing, if there’s one thing that you can take home and put it into action, it will be my big pleasure. I am here on Facebook, Instagram or WhatsApp, so let’s work on it together!